Heroes Wiki
Register
Don't have an account?
Sign In
Advertisement
in: Characters, Hooded Fugitive, Volume One Main Characters,
and 7 more

"Save the cheerleader, save the world!"
―Hiro Nakamura[src]

Claire Bennet was one of the main protagonists in Heroes. She was a former college student and cheerleader who was raised by her adoptive parents Noah and Sandra Bennet in Texas. Her biological parents were Nathan Petrelli and Meredith Gordon. In Heroes Reborn, she was the biological mother of twins: Tommy Clark and Malina Bennet.

Claire is born to Nathan Petrelli and Meredith Gordon, two people possessing abilities. When Claire is 18-months old, Noah Bennet and his partner, Claude Raines, agents of the Company, arrive at her mother, Meredith's, house to abduct Claire. Claude proceeds inside to "do the heavy liftin'" while Noah waits outside until Meredith combusts and blows the door open. Noah runs inside, finding Claire and carrying her out of the burning house. Noah and his wife, Sandra, later adopt her. In the graphic novel Elle's First Assignment, which takes place before the series begins, Bob gives Elle her first assignment, which is to track and follow Claire, posing as a student at Union Wells High School. Elle is reluctant, but Bob informs her that Claire will be important to the Company. Claire is unaware that Elle was following her.

Six months before the start of the series, Claire had just become a cheerleader at her high school, with the help of her friend Jackie Wilcox. During an argument on whether or not she wants to be a cheerleader with Jackie, Claire crashes into a glass case, cutting her hand. When they show Claire's parents, her mother, Sandra, suggests Claire might need stitches. After Claire, Jackie, and Sandra leave for the hospital, the phone rings, and Noah answers. It is Chandra Suresh, a scientist who studies paranormal phenomena, informing him of Claire's power. Several days later, Noah asks if he can see her hand with the stitches. When they unravel the cloth around her hand, they are both surprised to see not even a small scratch.

After discovering this abnormal ability, Claire decides to test her healing powers by trying dangerous stunts. She has her friend, Zach, videotape her stunts to document her healing ability in action.

In Volume Four, Claire learns that her other father, Senator Nathan Petrelli, is heading a government operation to round up people with special abilities when she overhears Nathan telling her grandmother Angela that they must keep Claire home and far away from this entire operation, having ordered immunity for Claire.

In the process of trying to warn Peter and Matt about this plan, Claire manages to find Matt. However, upon arriving at his apartment, Matt is captured and Claire is mistakenly taken by Emile Danko's team and hooded as well. Claire is brought to Nathan, who unhoods her and has her released into his custody, sending her back home. Nathan explains he has given Claire a free pass. It is revealed Claire is exempt from this operation due to being under the protection of both her fathers, Noah and Nathan, as Noah is revealed to be also involved with this program. She strongly disagrees with the operation and defies both her fathers.

However, the operation spins out of control when Danko exposes Nathan's ability, prompting the end of Claire's free pass but Nathan rescues Claire before agents can take her. Her strained father-daughter relationships with Noah and Nathan are mended by the end of this volume.

In "June 13th - Part One", it is revealed that Claire attended the Odessa Unity Summit. However, she left and later gave birth to twins. During childbirth, Claire dies from cardiac arrest. Her grandmother, Angela Petrelli, and her adoptive father, Noah Bennet, each name one of Claire's twins. Claire's son is named Nathan by Angela after her deceased son, Claire's biological father. Claire's daughter is named Malina by Noah after his mother.

In "June 13th - Part Two," Angela realizes that the reason Claire died was due to her son having absorbed her power during childbirth. The father of Claire's twins remains unknown. 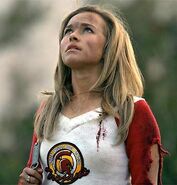 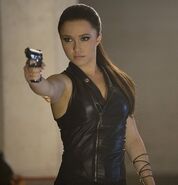