Noah Bennet takes matters into his own hands to get much-needed answers. After Tommy makes a startling discovery, he and Emily go on an unexpected journey. Elsewhere, Luke continues to come to grips with the fact that he has become what he has been hunting. Malina finds a surprising ally. Miko stays on the course to save her father, but Erica takes measures to interfere. Meanwhile, Carlos learns more about what is really going on with EVOS from an unlikely source.[1]

Noah Bennet, Quentin Frady, and Taylor Kravid are torturing M.F. Harris in order to get answers from him. Carlos is in El Vengador's lair, torturing James Dearing for the whereabouts of his nephew Jose, Dearing does not tell him what he wants to know, so Carlos continues, then he grabs Dearing's money which led to him talking, there's a place called "Sun Stone Manor" that put out ten grand a head for anyone with powers. Noah puts a device in Prime's nose that weakens him. Ren is at a coffee shop helping Miko advance through the game. Miko has a new mission to the "Eternal Fortress", it is the only place that can hold a master of time and space. Erica Kravidis at Renautas watching Miko play the game, apparently Miko thinks that she is saving her father but Erica says otherwise and Richard then says that Miko isn't Hachiro Otomo's daughter.

They have been modifying the game in order to keep Miko from discovering whatever it is she's suppose to find, then Richard cloaks the prison, so that she can't find it. Luke Collins calls Joanne Collins to tell her he sold the practice and burned down the house then he throws his phone in the ocean. Malina gets off of the large truck and walks off to the same ocean Luke was just at. Miko comes back to the real world, they both realize that everything in "Evernow" has a real world counter-part, so all they have to do is find the real world "Eternal Fortress". Miko draws a picture of a symbol she saw on the prison, they look up the symbol and find a company located at 88 Hill Valley Road, Midian. Noah and Quentin arrive at Erica's location with the help of Harris.

Miko and Ren also arrive shortly afterwards, now that they have the location of the"Eternal Fortress", Miko will have entered it in the game. Once in the game, she runs into an extremely big samurai, he tells her that no one will free the master of time and space. Miko re-enters the real world and tells Ren that she needs help, he pulls out his laptop and she goes back into the game. Ren and Miko begin fighting this gigantic samurai, she stabs him in the back of the neck and kills him but then Ren's battery dies on his laptop which leaves Miko to fight for herself. Back in the real world, Ren has climbed the gate on to the other side of the property and he hides in a container.

Taylor goes to the room where she last saw Francis but he's gone and so are all of the other EVOs that were there. Emily is in her room and Tommy pops in. Tommy teleports himself and Emily to Paris. Malina is walking around and she sees a vending machine, she has no money, so she uses her ability to create a big enough wind to shake the machine but Luke comes around the corner and sees her, Luke goes to put money in the machine and shocks himself, he still has little control over his ability then he walks away. Carlos is driving with James to sun stone manors to find Jose, he wants to know what they do to EVOs but James pisses him off, so Carlos slams on the brakes thus throwing James face into the dashboard. He tells Carlos that only EVOs can get in.

Tommy and Emily want to go up to see the Eiffel tower but they are scanning for EVOs and the machine goes off when Tommy sticks his hand in it, the soldiers tell him that he can't go up. He tells them that if he really wanted to he could send them all away which of course alarmed the soldiers, so they called for back up and they all point their guns at Tommy, so he teleports himself along with Emily on to a nearby boat. She gets mad at him because it was so risky, he tells Emily that he's supposed to save the world, he tells Emily about Caspar Abraham and his destiny and everything that he's supposed to do and Tommy is worried that he's not the hero he's supposed to be. Taylor is in her mom's office searching for where they might have taken Francis, she copies the video surveillance from the computer on to a flash drive. She's going through Erica's desk and finds some type of manual or book.

Prime is leading Noah and Quentin to Erica when Miko teleports right in front of them, she attacks Noah which allows Harris to get away, Noah begins talking to her in Japanese, he tells her that the sword belongs to one of his friends Hiro Nakamura. They realize that they have similar enemies, Erica Kravid for one. They become allies in search of Hiro and then she goes back into the game. Luke is on a boat with a book bag filled with heavy bricks, he straps in on to himself and jumps into the water, he clearly is trying to take his own life, Malina is watching all this happen from a bench, she uses her ability to pull him out of the water and over to safety. The workers are testing the machine that Renautas has been working on, it appears to work.

Noah and Quentin are in the elevator, he knows this could be dangerous, so he hands Quentin a gun. They get off the elevator and Noah fires a round into the ceiling, the workers become scared and use the machine to teleport themselves away while Richard gets caught by Noah, he shoots Richard in the foot, he tells Noah that they are using the machine to send things to the future, they've harnessed Hiro's time traveling abilities, Noah wants to know why: Erica is starting over, she wants to build a better world for a select few. Noah wants Hiro but they've trapped Him in the game, Ren falls out of the container and tells them that only Miko can save him, so they all look on as she plays the game. Inside the game there is a whispering voice saying "you are not the daughter of Otomo, you are life, stolen from a DEAD girl!" Then a samurai girl who looks very similar to Miko shows up and they begin fighting, she tells Miko that she's not real, she's just a character pulled from "Evernow". Richard tells them that the Miko we know isn't even real, the real Miko Otomo died in a car crash, this Miko was created by the game designer, he tells them that the only way for Hiro to be free is for Miko to sacrifice herself.

Miko teleports back to the real world then three Harris clones come out the elevator along with Phoebe Frady, Quentin's sister. Phoebe begins using her ability of Power negation and then the Prime clones begin shooting, Noah, Quentin, Miko and Ren run get inside a room protected by bullet proof glass, Noah smashed the door key to keep them from getting in. Tommy and Emily are walking through the streets of Paris, she tells him about the story of Claire Bennet and how she started all this then she gives him a 9th Wonders! comic, she tells him its his destiny and his responsibility. Miko attempts to go back in the game but can't because Phoebe won't allow her, so Quentin tries to talk to her while Miko and Noah distract the clones, Noah goes and shoots one in the back and Miko cuts one down the middle. He tries to talk to Phoebe and get her to stop but he can't, so he tackles her, then Miko goes back into the game, Noah tells Ren to go.

Phoebe tells Quentin that Erica gave her a purpose and that the time traveler cannot be set free or they're all dead, she uses her ability to kill Quentin and then Noah hits her in the face with a hard object and knocks her out. Then 3 more Harris clones return with four extra security guards, they have Noah surrounded. Miko is back to fighting the samurai girl in the game and she chops her head off then she releases Hiro. Prime shoots at Noah and right before the bullet hits him time stops, then Hiro appears, he tells Noah that he knows what he is about to ask him and that he knows that you shouldn't change the past, Hiro agrees to take Noah back to June 13th to everything. Taylor is in a hotel and hears on the TV that six hundred EVOs have gone missing since June 13th, so she sends a message to Hero Truther telling him that Renautas isn't doing what they say they're doing, they are responsible for the missing EVOs.

James tells Carlos to stop the car, they need to swap places, so that Carlos can be passed of as a bounty and then he can get into sun stone manor and save Jose. James gives Carlos what looks to be blood, he says that it'll read as a false positive when they swab him but once he drinks it, he starts coughing really bad and he passes out. Malina brings Luke some coffee, she wants to know why he tried to kill himself, he tells her that he didn't think he had a purpose for living, he was looking for a sign, Malina tells him that she's looking for someone too, she has the envelope in her hands a pulls out a picture of Tommy. Luke tells her that he knows him and the last time he saw Tommy was in Illinois, she tells him that its sign, that's why they met and together her and Tommy will save the world.

Tommy and Emily are in her room and she takes out his locating device and he teleports it to Antarctica, then he and Emily kiss. Erica finds the video that Taylor sent to Truther then Harris calls her and tells her that Hiro has been released, she gets extremely mad and throws her electronic device at the wall. Noah and Hiro have traveled back to June 13th to stop the explosion. 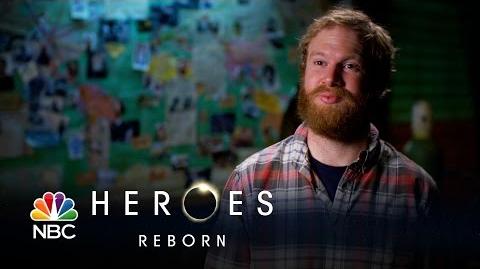 Heroes Reborn - Inside the Eclipse Episode 6 Game Over 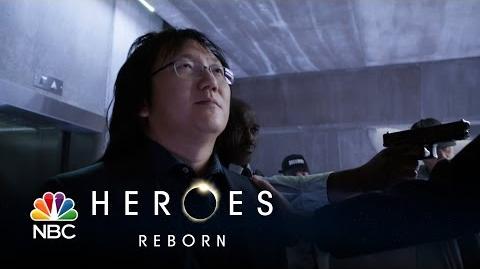 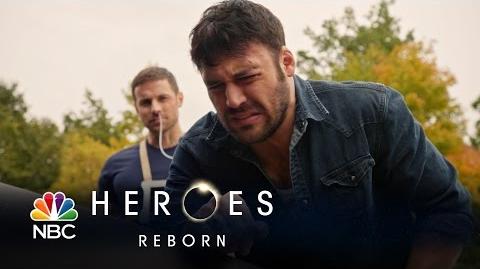 Heroes Reborn - A Deal with the Devil (Episode Highlight) 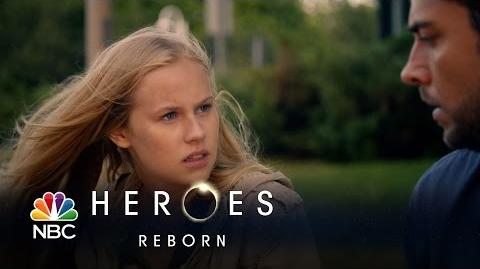