In an effort to get answers, Noah Bennet joins forces with Hiro Nakamura (to return to the day of the tragic events of June 13, 2014 that set everything in motion. On the verge of delivering a speech to commemorate the event, Mohinder Suresh receives a dire message from Angela Petrelli about Erica Kravid's true motives. In Japan, Hachiro Otomo makes a calculated move against Hiro Nakamura. Meanwhile, a much happier Luke and Joanne come to Odessa in hopes of finding a cure to their son's ailment.[1]

One year ago, at the Odessa Unity Summit, a flying Chinese Man arrives. Noah Bennet and Hiro Nakamura have traveled back in time, he tells Hiro that Claire never made it to the summit, she died at St.Judes hospital but he doesn't know what time. There were at least six bombs detonated at 11:14. No recommends they call in a bomb threat but Hiro insist that they don't step on any butterflies. Noah is approached by a man named Stevens and is informed that Claire is at the Summit then Noah Bennet from that year shows up but they don't notice each other.

On the outskirts of Odessa, Angela Petrelli and Mohinder Suresh are discussing their involvement with Erica Kravid and Renautas, Angela tells him that they've made a mistake, she reveals to him that Primatech is Renautas. She sold Erica the company thinking that Erica was planning something visionary but instead she's going to let the world explode but Mohinder doesn't believe her. She goes on to say that her visions also showed her the EVOs that can save everyone and this is why Erica wants Malina dead, however Mohinder still doesn't believe her, he leaves but then Angela receives a call from who she thinks is Claire but it's not. Erica Kravid and M.F. Harris shows up at a Richard's house, Richard tells her that "She's" nervous, its currenlty unknown who he's talking about but whoever it it, the fate of the entire world depends on them according to Erica. "She" is Phoebe Frady, Erica has plans for her but Phoebe is struggling with her ability, she's never channeled that much darkness before.

She has to cover the entire summit with her ability but she doesn't think she's strong enough, Erica threatens to let Quentin Frady die when the world explodes if Phoebe doesn't get this right. Luke and Joanne Collins are in a hotel room with their son Dennis, he's a EVO, he is burned whenever he goes into the sun. Joanne appears to be a lot different from what we've seen, she's a lot nicer. They want to go to the Summit in hopes that one of the EVOs can cure Dennis. Noah(2014) approaches Steven and asks about Claire and Hiro, Stevens is unaware that this isn't the same Noah he was just talking to.

Hiro(2014) is in Tokyo, Japan with Hachiro Otomo, he tells Hiro that Renautas has a plan to save people but only his power can accomplish it, Hiro refuses to help, so Hachiro uses his ability to force Hiro into the "Eternal Fortress", so that they could harness his powers, then Hachiro takes his sword and leaves. Present day Noah Bennet and Hiro are in his office, they hear a noise and hide in a secret room, then Noah(2014) and Erica Kravid enter the office, he wants to know why she would reframe security. They get into a fight over the EVOs and humanity which leads to Erica "benching" Noah(2014), they take him away. Then Angela shows up and tells him that Claire is at the hospital, so Noah goes with her and Hiro will stop the bombs. They arrive at the hospital only to be told that Claire died to in child birth, apparently she was pregnant but they were able to save the twins, Noah is completely shocked by this revelation.

Mohinder has just arrived at the Summit, he calls his team for a check in, the very same team that Angela told him was dead, now he is becoming worried, then he meet up with Molly Walker, he gives her his first copy of "Escalating Evolution", its a book he wrote. He is then approached by Prime and is taken to Erica, they've changed the schedule just like Angela told him, he now realizes everything she told him was true Her plan doesn't include him, he goes to fight Prime but is shot by a tranquilizing dart. Noah doesn't believe she is dead due to her healing ability but the doctors say that she died of cardiac arrest then they bring in his grandchildren. Prime has Mohinder on the ground in the garage, he plans on killing him, he has a bomb strapped to his chest but Hiro shows up, he and Prime begin fight, hiro cuts off both arms and then stabs him in the chest.

Hiro sets Mohinder free but then three other Prime clones show up, Hiro takes two of them while Mohinder takes the other one. Hiro is ready to kill both of them but travels through time first to see would would be the affect of it, he realizes that it would have a bad outcome and decided to leave them both alive. Joanne, Luke, and Dennis show up to the Summit but Joanne doesn't think its a good idea because of the protesters while Dennis is watching Ice Man make snowballs and then for his finale the guy pours some water in his hand and throws it up in the air and it turns into snow. Noah(2014) is in containment and Caspar Abraham shows up, Noah can't believe that he sided with Erica. Caspar admits that he likes Noah and that's why he convinced Erica to allow Noah to live but he has to first forget a few things which is why Caspar is there.

Caspar picks up a penny but then drops it on purpose next to the security guards, Caspar makes the guy forget everything that happen, Caspar has chosen to be on Noah's side. Noah goes to the morgue and finds Claire's body, he's crying and he apologizes to her, he promises to keep her twins safe. Hiro teleports in the room and says "too many bombs, too many butterflies", the consequences were always worse, now its time for them to go back. Hiro tries to take them back but Phoebe is stopping them, she is with Erica, she's finally learning how to control the darkness, its growing, it has reached the summit. Mohinder finally catches up to Harris' clone and he shows Mohinder the bomb that all the clones are wearing, they plan on bombing the summit.

Dennis goes to the Ice Man and asks him to freeze the balloon but he can't due to Phoebe then the sky completely darkens. Then Caspar and Noah(2014) notices it, they know it isn't natural, sh he grabs Caspar's gun and shoots it into the sky and tells everyone to run then the building explodes. Molly is searching for Mohinder when she finds Noah(2014) and Caspar. Present day Noah wants to go back one more time but Hiro and Angela agree that they shouldn't, they need to focus on what's left of the future. Noah finally understands what he made himself forget, he made himself forget that he hid Claire's children from Erica.

Luke and Joanne are searching for Dennis, Luke find the Ice Guy trapped, so he helps him out but he hasn't seen Dennis either. Noah and Angela come up with a plan to send them back to 1999, so that in the present day they'll be teenagers, it'll be right around the same time Claire's abilities manifested, Erica and Renautas are looking for two, 1 year old babies, they have no idea that the twins are actually teenagers. Angela names the boy baby Nathan, after the son she lost and Noah names the girl baby Malina after his mother. Hiro sends Angela back in time to raise them and Noah erases the survailence tapes, so that no one would know they were there.

Back in Japan Hachiro is watching the news of the Odessa explosion and see that Hiro is marked as dead but he knows this can't be true. Noah(2014) and Caspar are at St.Judes, he ask Molly to see if she can find Claire but she can't. Erica is on the news playing the victim and she calls all EVOs evil, Noah sees this and gets angry. Luke is still looking for Dennis. Anne Clark comes home and gives Tommy a cupcake because as we now know June 13th is his birthday. Noah(2014) sees the present day Noah and follows him while the present day Noah is following Erica, he puts a silencer on his gun and plans to kill her....... 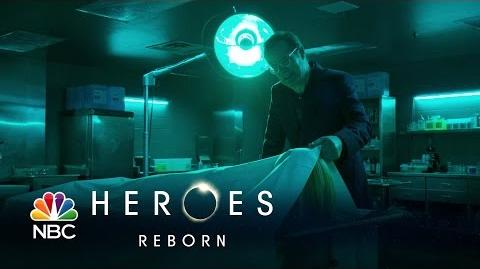 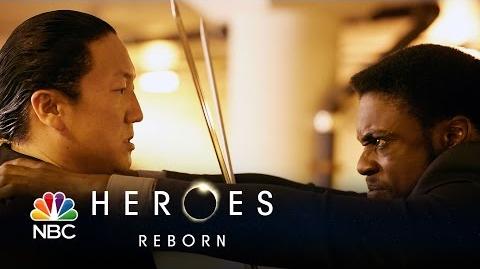 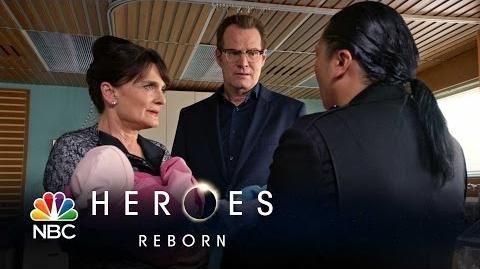 Heroes Reborn - Save the Cheerleader's Kids, Save the World (Episode Highlight) 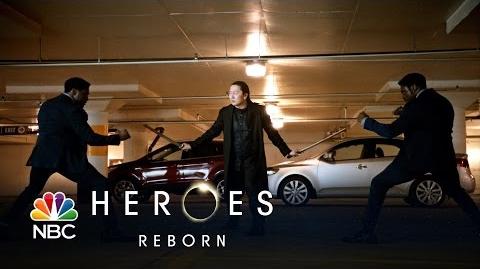 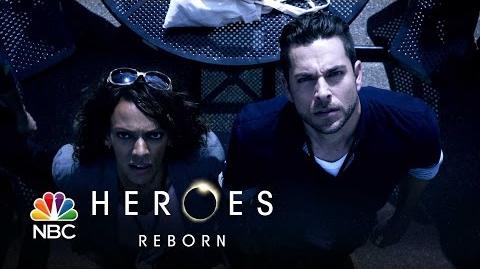 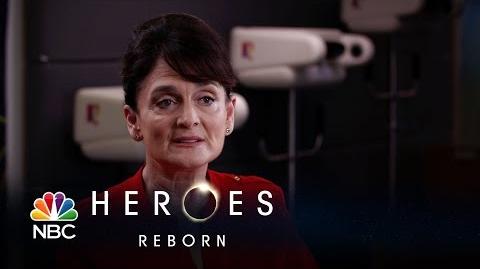