In the wake of an unspeakable tragedy, Erica Kravid puts her dark plan into motion with Renautas. Hiro and Angela are tasked with an important mission that could change the course of humanity. In Odessa, a distraught Luke and Joanne come to realize their tragic mission after the loss of their son. Meanwhile, Noah Bennet has an unexpected reunion with Matt Parkman. In Japan, the origins of Miko come to light. Elsewhere, the truth behind Carlos' military service is revealed.[1]

Erica Kravid is playing the victim, she's pretending as if the explosion wasn't her doing, she's on the news, and she blames everything on the EVOs. Then Quentin Frady(2014) shows up at the hospital to find his sister. This is the moment when Mohinder Suresh became one of the most wanted EVOs, Renautas blames him for the explosion and the murder of his research team. Erica goes back to Primatech Paper for photo opps, while M.F. Harris searches for Claire Bennet, he sees Quentin and he runs away. There's a video of Mohinder admitting to the blast, he believes that the EVOs are superior.

Noah Bennet(2014) and Caspar Abraham are in the E.R. at St. Judes, Noah(2014) spots his present self and follows him, he stops himself from killing Erica, but she gets shot in the leg. Quentin is in the stairway, he hears the noise and sees Erica on the ground, he drags her into the stairway with while both Noah's argue with each other. Quentin threatens Erica, he wants to know where phoebe is, she tells him if he doesn't help her then he'll never see his sister again. Hiro Nakamura, Angela Petrelli, babies Tommy Clark and Malina are in Odessa, Texas, 1999, Hiro tries to teleports them to Angela's place in Switzerland but his power doesn't work, Tommy is technically a Petrelli, he has the same Power absorption ability as Peter Petrelli and Arthur Petrelli, he took Hiro's ability.

Angela and Hiro and forced to go their own ways in efforts to keep Tommy from taking Malina's ability, they must grow up apart. Carlos Gutierrez is being interviewed by a lieutenant on his action during the war, Farah Nazan is also there, she claims Carlos saved her. Both Noah's are discussing the recent events then present day Noah asks Molly Walker to see if she could locate him, she says that she can tell that his power is in Odessa then Caspar is going to make Noah(2014) forget everything he's learned that day but he is knocked out by a Prime clone, Noah(2014) is taken. Luke and Joanne Collins are waiting to see if Dennis shows up, he does, a worker brings his body in, Dennis is dead, they both begin to cry. Noah(2014) is in a closet, being held at gun point by Prime then Matt Parkman enters the room, he's working for Renautas, Matt sold his ability to the highest bidder.

He reads Noah's(2014) mind, he learns that Claire is in Odessa but she's dead, she died in child birth, Matt is sorry for his loss. Prime wants to know where the baby is but then a penny rolls in the room, thus making Noah forget everything he's learned, this is clearly the work of Caspar. Harris tries to shoot him but Caspar comes in and knocks him out, Matt picks up Prime's gun but he can't bring himself to pull the trigger, so Matt lets them leave. Farah is in her hotel room when Carlos shows up, she leaving, he tells her that he's getting a metal for what she did, apparently they made a deal, Farah doesn't want the truth to be revealed because the world is turning against people with powers, Carlos kisses her but she slaps him and he leaves. Hachiro Otomo is watching the news and realizes that Erica is blaming everything on EVOs, she tells him his job is done, Otomo tries to log into "Evernow" but he can't.

Erica is in a hospital bed being treated for her wound, Prime tells her that there were two Hiro's which explains two Noah's, she wants Prime to kill the present day Hiro and Hachiro. Otomo creates a backdoor into the game so that Hiro can be saved thus the creation of "Katana Girl", he tells her that he's her father. Molly and present day Noah are driving to find Hiro, they arrive to a house and find Hiro, but he's much older, 15 years to be exact. He raised Tommy as his son along with Anne Clark. Hiro, Noah and Molly begun talking, now Noah realizes why Claire died, she couldn't heal due to Tommy's power.

Anne and Tommy enter the room, Hiro introduces him to Tommy as his grandfather, they are excited and they hug. Apparently this Tommy already knows of his destiny and he's ready for it. A Prime clone comes bursting in through the door, he grabs Tommy but he teleports Prime to the other side of the room where Noah shoots him. Hachiro tells Katana Girl that she was in a accident and thats why she doesn't remember anything, he tells her that her name is Miko. Joanne and Luke are in their hotel room when the Ice Man knocks on their door, he wants to thank Luke for saving him, Joanne gets mad because she saved him instead of looking for her son.

She refers to the guy as "one of them" and a "freak", Luke says that he had to help, Joanne attacks the guy but he pushes her off really hard, then Luke attacks but the guy grabs him by his throat and begins to freeze him but Joanne stabs him with scissors, repeatedly, she kills him and then smiles. Caspar takes Noah(2014) back to the explosion site and makes him forget. Noah(2014) is completely oblivious to the events that have just taken place then he meets his future Finace Julia for the first time. Present day Noah and Tommy have found Angela, as to be expected, she's also aged 15 years, Tommy wants to go and meet Malina but he can't infear that he would take her ability.

Lately, Angela has been plagued with dreams of "fire raining down, blood everywhere, and the twins saving the world under a clock tower in Odessa", the hand of the clock is stuck on 11:53. Tommy says that he'll be ready when its his time to save the world, Angela begins to smile and cry, she says "he really is a Petrelli isn't he?", then she takes a picture of him with her phone. Erica is in the bed and Quentin comes in, he knows that they framed Suresh, they used a Shape Shifting EVO to look like him and then used Phoebe darkness to cancel out the abilities at the summit and they blew it up. Farah shows up and begins talking to Angela, she tells Farah that Malina is half of mankinds greatest hope, she must be brought together with Tommy in Odessa but no sooner for someone unknown reason that Angela is hiding.

Prime knocks on the door of Hachiro's home, he knows that Prime is there to kill him. Erica keeps her promise to Quentin, he brings her to Phoebe, they hug but he realizes something isn't right, she tells him that Erica gave her a purpose and will save the world. Caspar is with Molly and Present day Noah, he tells him that the other Noah remembers nothing then Noah asks himto keep an eye on Tommy, then he tells Molly to be careful because Erica will come after her powers, Molly replies I'd rather die than give them up, she doesn't know that she already has in present time. Tommy send Molly to Chennai, India, so that Mohinder's mother can know the truth.

Tommy then sends Present day Noah back to his own time. Three Prime clones pull up to the house, Hiro tells Tommy to teleport himself, his mom and Caspar some place safe but first he give Tommy a 9th Wonders! comic, he tells him that they predict the future, Hiro then says goodbye to them all. Tommy teleports them away while Hiro stays and fight the clones. Tommy wants to go back but Anne won't let him, so she forces Caspar to take away the memory of Hiro completely. Noah has been sent back to the present day, he's in Midian, then Present day Quentin who should be dead but isn't calls his name.

He wants to know where Noah's been but Noah is still in shock, he can't believe Quentin is alive then Quentin realizes that Noah must have time traveled. He wants to know everything Noah now knows, Noah tells him everything. Then Quentin calls Erica and tells her everything that Noah told him, by shooting at Erica, Noah has changed certain events, Quentin never died and is now working with Renautas. 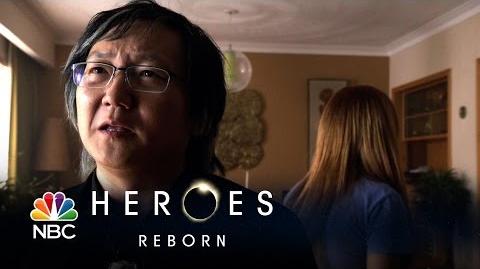 Heroes Reborn - Can They Save the World? (Promo) 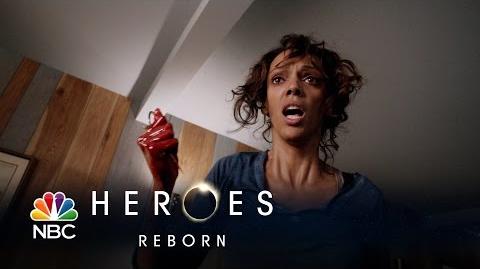 Heroes Reborn - The Start of Something Bad (Episode Highlight) 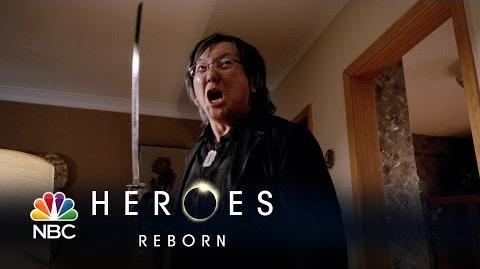 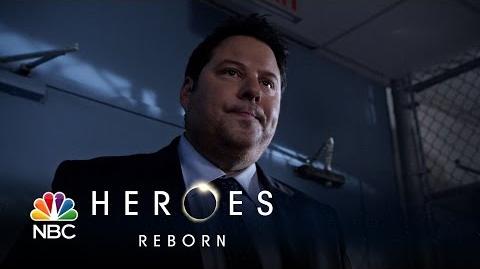 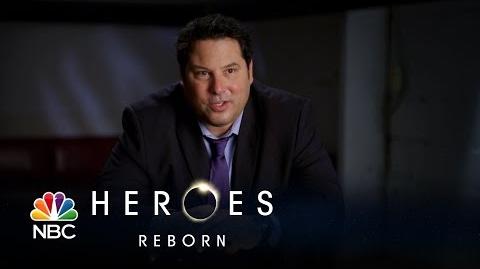 Heroes Reborn - Inside the Eclipse Episode 8 June 13th, Part 2
Add a photo to this gallery

Add a photo to this gallery

Retrieved from "https://heroes.fandom.com/wiki/June_13th_-_Part_Two?oldid=24773"
Community content is available under CC-BY-SA unless otherwise noted.