June 13th - Part One
Mohinder Suresh was a university professor in Chennai, India. After learning about his father's death, Mohinder vowed to seek out his killer. Mohinder also decided to continue his father's research on evolved humans. He injects himself with a serum that gives him artificial powers of enhanced strength and agility.

As a child, Mohinder was raised to believe in monsters. In 1982, his grandmother would tell him about stories relating to the goddess Kali and the mythology surrounding her. Meanwhile, his father Chadra refuted them, saying that there were no such thing as monsters.("Monsters")

In Chennai University, Mohinder gave out a lecture to a group of adult students. Mohinder talked about his belief that God created himself in his own image as a cockroach, saying that they are the "pinnacle of evolution". He excitedly explained to the group about the Human Genome Project's discoveries about possible powers such as teleportation, levitation, and tissue regeneration. Mohinder was interrupted by a solemn man, Nirand, who informed Mohinder of his father's death.

Three days after his father's death, Mohinder went to a New York morgue where his father's body was being kept. He examined some of his belongings which led him to a taxi cab company called The Chelsea Cab Company in Cedar and Trinity. Meeting the owner of the company, he learned that his father had been working as a taxi driver there, something which puzzled Mohinder as his father had always been a geneticist as far as he knew. After being shown the misshapen wreckage of his father's car, Mohinder was aghast at how such a thing could have been possible. Mohinder realized that it could only have been caused by a person with the powers he and his father had always believed in. Mohinder knew that he had to follow them so after being offered a job as a taxi driver, he immediately took the offer. At that moment, unbeknownst to him, he was being observed and photographed from afar by the man in the horn-rimmed glasses.("Monsters")

That same day, Peter Petrelli coincidentally hopped into a taxi driven by Mohinder. They shared a conversation about the solar eclipse above them. Peter introduced himself and asked Mohinder if there would be another bigger purpose in life. Mohinder told Peter that some people are indeed special and that it is "destiny". As Peter hopped out of the taxi, and another man entered, the same man with the horn-rimmed glasses. The man talked about Mohinder's father and his research. Frightened, Mohinder jumped out of the cab and ran away. ("Genesis")

Along his journeys working for the Company, Mohinder came across a man that could absorb electrical currents and produce waves of electromagnetic pulse, creating blackouts, disrupting circuits and electronics. He became such a threat to others around him that he stopped defibrillators and life support systems from working, killing those using those systems. Mohinder drove him out to an area where he was far enough from the grid to not affect society. Before he left, Mohinder handed the man a copy of his father's book Activating Evolution.

A channel six news reporter reports that Mohinder has claimed responsibility for the explosion at the Odessa Unity Summit, they describe him as a "radical EVO supremacist leader. Since then Suresh as been hunted and labeled as a terrorist.

Quentin Frady has constructed a board of events, this board includes Mohinder along with two news articles that say "Hunt for Suresh Continues" and "Suresh Finally Arrested in Chennai".

In "Brave New World (Reborn)", Mohinder is mentioned during a EVO Support Group, one guy says that Suresh was right in believing that evolved humans are the future.

In "Under the Mask", Jimmy Rourke is on the radio discussing EVO rights and this leads into him telling his listeners that Suresh is still on the run, the manhunt continues.

In "The Lion's Den", Mohinder's picture shows up on a television screen of some of the most wanted EVOs.

In "June 13th - Part One", Mohinder is picked up by Angela, she tells him that it was a mistake to join Erica Kravid and Renautas but he disagrees, Renautas has been funding his research which is something Primatech never did, she explains that Primatech is Renautas and vice versa. Angela sold Erica Primatech because she thought Erica would save the world but Erica plans on letting the H.E.L.E hit earth, however he doesn't believe her and he leaves. Mohinder arrives at the Odessa Unity Summit, he calls his team for a check in, the same team that Angela told him was dead, no one answers, he is worried, then he sees Molly Walker, he gives her his first copy of "Escalating Evolution", its a book he wrote. He is then taken to Erica, they've changed the schedule just like Angela told him, he now realizes everything she told him was true, Erica's plan doesn't include him, he goes to fight Prime but is shot by a tranquilizing dart. Mohinder is on the ground in the garage, Harris plans on killing him and he has a bomb strapped to his chest but Hiro shows up and saves him. He is freed but then three other Prime clones show up, Mohinder chases one. Finally, he catches up to the Harris' clone and he shows Mohinder the bomb that all the clones are wearing, they plan on bombing the summit.

In "June 13th - Part Two", on the channel 12 news, they are reporting that Mohinder has taken responsibility for the explosions at the Odessa Unity Summit and the death of his research team. They even play a video of him admitting to these acts, he goes on about how the evolved humans are better and that they're the future. However it's a shape shifting EVO that works for Renautas, pretending to be Mohinder. This is the moment he became known as the evil EVO terrorist leader. 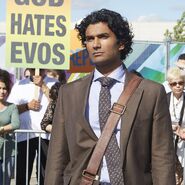