Under the Mask
Odessa is the second episode of Heroes Reborn. It aired on September 24, 2015.

After a terrorist attack in Odessa, Texas, left the city decimated and lives in shambles, those with extraordinary abilities are in hiding after being blamed for the catastrophic event. A new world order has them being hunted by those with nefarious motives, such as Luke and Joanne Collins, who are out to avenge a tragic loss of their son. Meanwhile, Noah Bennet has taken measures to put his old life behind him and start over, until he comes face to face with Quentin Frady, a conspiracy theorist out to uncover the truth behind the Odessa tragedy. Elsewhere, some are discovering their newfound skills. Awkward teen Tommy just wants to be normal and win the girl of his dreams, Emily, but normalcy is virtually impossible after learning of a new ability that terrifies him. Coming from a very sheltered upbringing, a bold and ethereal teenager, Malina, has been told she is destined for greatness. In Tokyo, a quiet and unique young woman, Miko, is trying to track down her missing father while hiding an extraordinary secret that will make her a force to be reckoned with. In Los Angeles, a different type of hero is emerging through former soldier Carlos. For better or for worse, some are fated to cross paths with assorted heroes of the past and together their ultimate destiny is nothing less than saving the world and mankind.[1]

Noah Bennet is in a gas station restroom trying to understand the recent events that just took place. Tommy and Emily are in a shed talking about his ability, he compares being an Evo to being a witch in Salem, he then makes a flower disappear out of her hand and Brad sees it. In Texas, Noah has bailed Quentin out of jail, he tells Quentin that he wants to know everything he knows about June 13th. Tommy is confronted by Brad about being an Evo, Brad threatens to turn him in to the authorities. Luke and Joanne are trapped in an unknown location, they are trying to find a way out but nothing seems to work.

Ren Shimosawa shows back up at Miko's apartment again and begins to play the online game and assist Miko in beating it, Miko finds her father in the game. Tommy explains to Brad that he isn't a radical, Brad believe him and says his secret is safe as long as he does him a favor, Tommy agrees and they leave together, Tommy of course still being unaware that he's being followed by Caspar Abraham. Carlos and Jose have returned from Oscar's funeral. Brad reveals to Tommy that he wants him to get rid of his stepdad because he's a bad person, Brad leaves the room but Tommy decides against it and runs away. Noah and Quentin are on their way to Primatech, they're trying to figure out what's the connection between June 13th, Renautus and Primatech.

Miko finds her dad in the game but he is snatched away before she could save him. Molly Walker is at some type of casino and she seems to have her eye on Francis who is winning at the table, she approaches him and they begin talking, he invites her back to his hotel. Caspar knocks on Brad's door and his stepdad answers and invites Caspar in. Carlos is reading a newspaper and he sees that El Vengador is being accused of killing 3 cops and raping a woman. Miko finally wakes up after being knocked out and goes back into the game. Molly is at hotel Dean, the guy from the casino, she grabs a knife and hides it behind her back then she tells him that she knows he cheated at the casino because he's an Evo, she throws the knife at him and he uses Telekinesis to stop it.

Molly wants the money and if he doesn't give it to her, she'll tell the casino, he decides not to give it to her and they fight but she's able to escape thanks to the help of two civilians and an unknown woman. Quentin and Noah arrive at the remains of the Primatech company, They're looking for files involving Molly Walker or Renautus, while searching, Quentin discovers an attendance sheet of every Evo at the summit, however, Claire Bennet was listed as "N/A". Bennet begins to wonder why Quentin is so interested in this, Quentin tells him that they have his sister Phoebe Frady. It's revealed that Luke and Joanne are underground at Primatech. Luke begins to wonder why there isn't a light switch, he realizes that if the room goes dark, he may see something they shouldn't and he was right, there's a window in the room and Luke breaks it.

Caspar is still watching Tommy and then he is approached by Brad and Brad hugs him because he thinks that Tommy made his stepdad go away. Officer Pakowski is attacked and questioned by El Vengador (Carlos) about who told him to set up El Vengador, officer Pakowski says it was his captain. The woman that saved Molly reveals that her name is Taylor, Molly tells her that she needs the money to disappear and Taylor offers to write her a check. Carlos goes to the priest because he knows the priest is involved with El Vengador, the priest tells him that Oscar created El Vengador because of June 13th, Oscar had a system set up to help Evos escape and then the priest displays this unknown ability.

Tommy and Emily are talking about how Brad's stepdad was gone, Tommy also tells her that he thinks someone is watching and protecting him, then they find the flower that Tommy made disappear earlier and realize that whatever Tommy is thinking of when he uses his ability, that's where the person or object goes. Luke and Joanne shoot their way out of Primatech. Noah reaches the bottom floor and finds everyone dead except for one person and he tells Bennet that they found a way to monetize the Evos, so they can save the world. The priest shows up at Oscar's garage with an Evo and her son in order to help her escape. Joanne and Luke steal Bennett's car and they discover a list of all the Evos and where they live. Bennet tells Quentin that Renautus is using powers to make some new technology. Taylor tricked Molly, she's working with Francis. Miko transports to the Yamagato building and beats up he security. 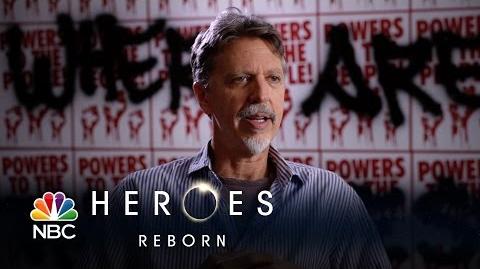