The third season of Heroes began airing Monday, September 22, 2008, beginning with Volume Three: Villains and concluding with Volume Four: Fugitives, ending on April 27, 2009. Volume Three begins with the assassination attempt on Nathan, and the consequences it has in the future. In addition, several villains escape from the confines of Level 5, and the Company attempts to recapture them. Volume Four starts with Nathan telling the President about the existence of advanced humans and the hunt for said humans ensues.

Chapter One -- The Second Coming

Original Air Date: 22 September 2008
The man who shot Nathan is revealed. Nathan is visited in the hospital by a familiar face. Hiro receives a massage from his father and meets a "speedster". Claire is visited by Sylar. Matt is sent against his will to a distant location. Mohinder learns something amazing because of Maya. Hiro sees his death by an unlikely person.

Original Air Date: 22 September 2008
After Sylar murders Bob, Noah and many prisoners of Level 5 escape thanks to Elle. Tracy's power is revealed. Angela takes control of the Company. Mohinder experiences the said effects of his new found abilities. Meredith returns to protect Claire.

Chapter Three -- One of Us, One of Them

Original Air Date: 29 September 2008
Angela sends Noah and his new partner, Sylar, to stop a bank heist led by knox. Tracy tries to find answers about Niki, which leads her to Micah. Hiro loses the second half of an important formula to Daphne. Claire asks Meredith to teach her how to fight.

Chapter Four -- I Am Become Death

Original Air Date: 6 October 2008
Tracy learns the secrets of her past, and her connection to Niki. Peter travels to the future, where he gains a dangerous new ability. Matt has visions of this same future, seeing a woman that he will one day have a child with. Hiro and Ando, looking for answers, free Adam Monroe from his grave.

Original Air Date: 13 October 2008
Nathan learns a secret from his past, that tries him even closer to Tracy. Hiro tries to befriend Daphne. Arthur Petrelli is revealed, and he works to recruit people to his cause using Maury Parkman's ability. Claire hunts after a villain herself, only to find how ruthless her father can be on his missions.

Chapter Six -- Dying of the Light

Original Air Date: 20 October 2008
Arthur Petrelli reveals his ability. Matt tries to forge a relationship with Daphne as she works to recruit for the Pinehearst Company. Hiro and Ando search for Usutu. Claire and Sandra try to save Meredith from the clutches of Eric Doyle.

Original Air Date: 10 November 2008
Hiro has a vision of the past, showing how villains Arthur, Sylar, and Flint became the way they are. Thompson captures Meredith, forcing her to become an agent for the Company. Angela Petrelli learns the truth of Arthur and Linderman's schemes. Noah and Elle track Sylar, and help shape his transformation into a monster.

Original Air Date: 17 November 2008
Ando tries to help Hiro regain his memories after they are wiped by Arthur. Nathan and Tracy confront Arthur. Knox and Flint chase after Peter and Claire, hoping to forcefully recruit Claire to the Pinehearst Company. Sylar reunites with Elle and learns an amazing truth about his abilities. Matt and Daphne try to awaken Angela from her coma. 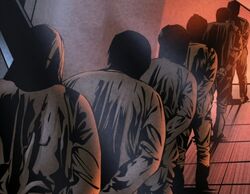 The fourth volume of Heroes, titled Fugitives, starts with episode fourteen and span over the last twelve episodes of Season Three.

Chapter One -- A Clear and Present Danger

Original Air Date: 2 February 2009
After the destruction of Primatech and Pinehearst, the Heroes attempt to lead normal lives until Nathan initiates his plan to round up all people with abilities. Meanwhile, Sylar begins the search for his real parents.

Retrieved from "https://heroes.fandom.com/wiki/Season_Three?oldid=19301"
Community content is available under CC-BY-SA unless otherwise noted.