Send in the Clones

Send in the Clones

Company Woman
Send in the Clones is the eleventh episode of Heroes Reborn. It aired January 7, 2016.

Following Noah's mysterious disappearance, Luke and Malina unite to rescue Tommy and save mankind. At the mysterious Sunstone Manor, Carlos and Farah fight alongside The Haitian to take down Matt Parkman and free the prisoners under his control. Meanwhile, Tommy and Miko join forces against Erica and her brutal plan for the future.[1]

In Bedford, Missouri, Luke and Malina arrive at a local store to buy supplies. Malina is looking at her grandfather's broken glasses, Luke offers to circle back and look for him but she'd rather continue their mission because of what's a stake. She believes that Erica Kravid took Noah and Tommy. They plan on going to Midian, Colorado to get Tommmy and then going to Odessa. Prime, Quentin and Phoebe are on their way to midian, they're watching the recorded video of Malina using her power to calm the storm.

Prime plans on cutting them off and killing Malina, Phoebe is on board with the plan, however, Quentin is having second thoughts. Tommy and Miko teleport to the garden of Gateway, he asks her several questions and then comes to the realization that she's "Katana Girl" from the 9th Wonders!, Miko then begins to dematerialize. Erica is angry at Hachiro Otomo because his creation is destroying everything, she is forcing him to fix the mess he caused. At Sunstone Manor. Dozens of Prime clones have forced Carlos, Farah, Taylor and Rene into hiding in the building. Farah tells them about the H.E.L.E and that Erica Kravid is preparing for armageddon, they then separate, Rene and Taylor go to stop Matt Parkman and Carlos and Farah go to find Jose,Father Mauricio and Micah.

Carlos and Farah find the control room but its being blocked by 3 Prime clones, they kill them, and he and Farah cut off the recording of Matt over the intercom. Carlos finds his El Vengadorsuit and puts it on to even the odds. Rene and Taylor enters Matt's office, they want to know where Micah is, Rene tries to remind Matt of the man he once was and Taylor tries to convince him that her mom is lying but it doesn't work, Matt pulls a gun from under the desk and shoots Rene in the ear. He then forces Rene to leave and he keeps Taylor as leverage. Tommy and Miko stop to see what else the comic says, it shows Miko at Sunstone Manor, Tommy sends her there so that she can play her part.

Erica approaches but Miko is gone, Tommy tells Erica that Miko was going to kill her, so he sent her away, she then has Tommy take them back to Odessa. Miko arrives at Sunstone but she is still dying. Carlos and Farah find the other prisoners and want to help free them but they have to find Micah first, the priest tells them he knows where Micah is. Matt reads Taylor's mind to find out why she is fighting with her mom, he learns that its because of Francis, then he learns that she's pregnant. As they're leaving Matt is stopped by two Prime clones, he uses his ability to make them shoot themselves. Carlos finds Jose and they go to find Micah while Farah organize their defense. Prime is at a intersection waiting for Luke and Malina to pass by, they eventually do and Prime stops them, Luke and Malina are forced to hide in the corn field.

Malina attempts to give them cover but Phoebe is using her ability to stop it. Tommy and Erica arrive at Gateway present time, Erica explain that she picked the people who would come and she admits that she wasn't truthful in getting them there. Phoebe catches Malina but she is soon knocked out by Luke who then fries a Prime clone. Quentin recognizes him as the Odessa guy who shot him, Luke threatens to kill Quentin if he doesn't put the gun down, Quentin decides its not worth the risk and he drops the gun, then Malina put the Power Negation Device in Phoebe's nose. Tommy and Erica enter the gateway community center, he finds his mom and Emily. Luke and Malina has Quentin and Phoebe locked in a barn, Luke confronts her on killing everyone at the Odessa Unity Summit then Luke forces them to tell where Tommy is, Luke wants to kill Phoebe for what she did but Malina convinces him not to.

Erica introduces Tommy to Richard Schwenkman, he explains to Tommy that they;ll use to machine to amplify his powers. Harris calls Erica and tell her that Parkman is rogue and that he has her daughter, he goes on to tell her that Miko is there and this leads Erica to believe that Tommy lied to her. Carlos is trying to break his way into Micah's containment but he' interrupted by a Prime clone, father Mauricio attacks him using his ability of Smoke Mimicry to distract him long enough for Carlos to kill him then a security guards comes in and kills the priest. Carlos tries one more time to break the glass and he does once freeing Micah, they go to find a computer for him to use.

The real Harris Prime shows up with a axe and tells his clones taht this is his fight. He and Miko begin to fight. Originally she is getting the better of him but he comes back and gains control of the fight, in doing so, he gets Miko into a vulnerable position and he tries to kill her from behind but Miko has something else in mind, she use her long bladed weapon and stabs herself along with Prime, she then cuts off his head completely thus killing him along with all of his clones, shortly after Miko dies. Micah tells them that every piece of information from Erica went through him, he knows everything. He then goes on to tell them about the two massive solar flares, one at 11:18AM(destruction of north america) and the other at 11:53AM(destruction of everything else). Micah connects himself into every live media outlet in the world.

He tells the world that Erica has been feeding them lives, she's the reason for the war between EVOs and non EVOs. Joanne is brought to Erica, she offers her a job and a alliance with Renautas. She gives Joanne a assignment, her next target is Malina and Luke. Everyone is headed to Odessa. Luke, Malina, Quentin and Phoebe are 823 miles away. Carlos, Farah, Jose and Micah and 1,285 miles away. Matt and Taylor are 1,165 miles away. The HELE is on its way to earth. 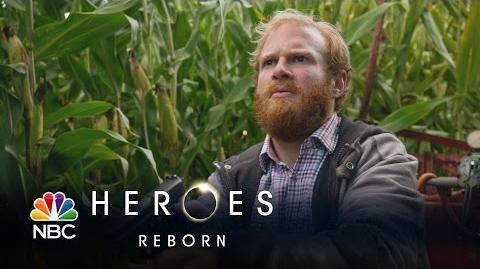 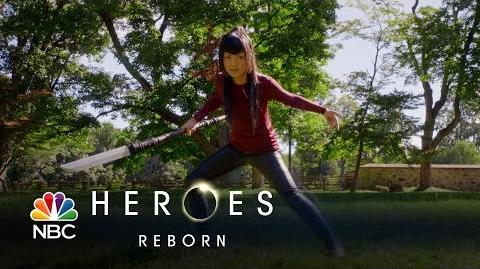 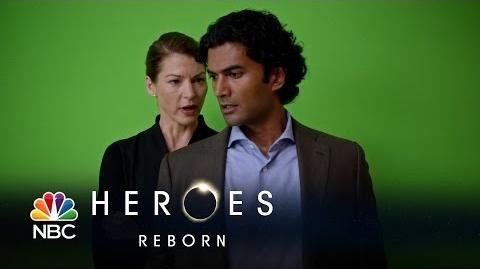 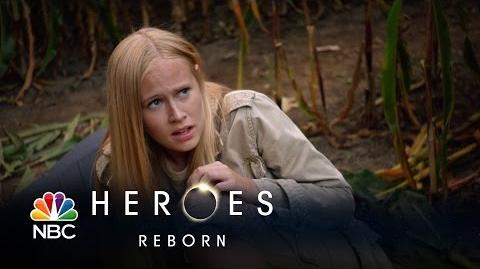 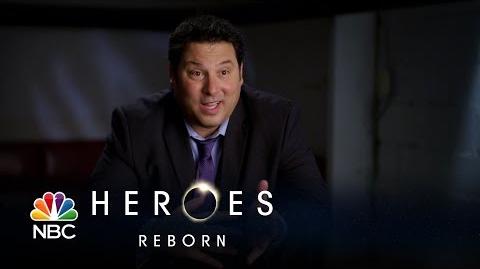 Heroes Reborn - Inside the Eclipse Episode 11 Send in the Clones