Noah is on the hunt for Tommy to reveal his past to him and guide him on his destiny to stop a catastrophic event. Taylor's discoveries about her mother, Erica Kravid, leads to her capture by an underground group. Erica escalates her search for Tommy and Malina as the race to finalize her dangerous plans intensifies. Elsewhere, Emily has an unexpected reunion with Joanne. Meanwhile, Dearing leads Carlos closer to finding his kidnapped nephew and Luke and Malina are separated in a violent encounter.[1]

Carlos wakes up in the passenger seat of his car, he has the EVO power negation device strapped to him and hand cuffs on, however the are not actually on him, it appears James Dearing didn't turn on him. They continue their route to Sunstone Manor. Taylor Kravid is in her motel room, going through Mohinder Suresh' "Escalating Evolution" book, that she took from her mom's office. Luke and Malina are headed to Carbondale Illinois, in search for Tommy Clark. Ren Shimosawa attempts to login to Evernow.

Tommy and Emily are walking, Tommy has to leave to go and check on his mom at the hospital but first, he gives Emily a bracelet and she returns to Moe's Ice Cream Shop, unaware that Caspar has been watching them, he's also on the phone with an unknown person. He tells them that Tommy is on his way and that he only has a few more loose ends to tie up. Taylor is looking in the mirror and her hair, she has dyed it red. Hero Truther has contacted her back, he's received her message then arranges a meeting. At Erica's house, she and Richard Schwenkman are talking about their dead line, they only have a week before the H.E.L.E hits and he's worried but Erica assures him that the plan is still in motion.

Erica notices a deer in her yard, she grabs her rifle, goes outside and shoots it. Tommy and Anne begin talking in the hospital, she tells him that she only lied to him because she wanted him to have a normal life but now she's ready to tell him the truth. She tells him that he has Hiro Nakamura's power and that he can time travel, he doesn't believe he but Noah enters the room and tells him he can. Noah has to get Tommy and Malina to Odessa, Texas. Luke and Malina have stopped at a diner, they begin talking about Tommy and destiny, she asks him what is the purpose he lost but he doesn't want to answer, he then lightens the mood by showing Malina his ability.

Carlos and Dearing pull up to Sunstone Manors, James is clearly a regular there, they know his name and he knows theirs. They take Carlos and swab him to see if he's a EVO, the substance that James gave Carlos worked, he registered as a EVO and then they take him away. Taylor goes to meet Hero Truther but is taken by several men in mask, she is thrown into their truck and they drive away. Malina and Luke are back on the road, she tells him that she would feel connected whenever she would watch movies with her grandmother, then Luke goes on to tell her about his son Dennis Collins. Carlos is being walked to a unknown location, he asks the guy what do they want with him, they evaluate EVO's and determine if they'd be value to the organization, then Carlos knocks him out.

Taylor is in a abandoned warehouse with her face covered, the hood is pulled off her head and she sees that it's her mother, they begin arguing and Taylor refuses to tell her anything. The its revealed that Taylor wasn't really talking to Erica, it was a shape-shifter named Henry posing as her, the guy is also working with René, they wanted to make sure that she was true to the cause. Taylor wants Francis back and Rene tells her that they also have Hero Truther at Renautas, so they plan on taking them back. The real Erica is back at her home, she is talking to her chef, who is preparing her a meal then M.F. Harris enters the room and tell her that Taylor was last seen in Los Angeles, California, they then admit to using Micah for a specif reason but they don't reveal what that reason is.

Caspar is in Moe's ice cream shop with Emily, however she has no idea who he actually is, he grabs a penny and spins it on to the counter and is about to make her forget Tommy but at the last moment, decides against it, then Joanne enters and points a gun at her. Caspar suspects that Joanne is trouble and he drops multiple pennies on the floor but right before Joanne touches get, she can see Emily warning Caspar off, so she pulls the gun out on both of them and closes the shop. Carlos has stolen the clothes of the guy he knocked unconscious, he contacts Dearing through an ear piece he's wearing and tells him that he's going down stairs then the director begins speaking over the intercom. Carlos is walking through the calls and look into a couple of rooms, he sees EVOs being tested on. Dearing wants to know what's taking them so long with his money.

SunStone has instituted a new policy, they now swab people who bring in EVO's in order to make sure that EVOs aren't bringing in other EVOs, Dearing now realizes that he's in trouble a guy approaches him but Dearing throws him into a door but beofre he could do anything else, he is tranquilized by Bonnie, the lady at the counter. Quentin approaches Tommy in the hallway of the hospital, they start talking but then Emily calls and Tommy goes into the bathroom for some privacy, however it's not Emily that's on the other side, it's Joanne, so Tommy teleports himself to Moe's. Quentin then goes into the bathroom with a gun to take Tommy but he's already gone. Caspar tries to talk Joanne into putting the gun down, he tells her that he can make her forget all of her pain but before she can say anything, Tommy arrives. Caspar throws his suitcase containing all of his pennies into the air and they fall all over, Joanne gets angry and shoots him in the head.

Luke and Malina pull up to Moe's just in time to hear the gun shot. Joanne is about to kill Emily next but Luke walks in, Luke hands begin to glow, he tells Joanne to stop, he sets the table on fire as a warning. Malina sneaks into the shop through the back, she hears as Luke tells Joanne that killing people didn't make him feel better, he only did it for her. Joanne attempts to shoot Emily and Luke tries to stop her but Tommy yells NO!!! and he stops time, he's amazed at what he just did. He moves Luke's hand to keep him from killing Joanne and then he moves the bullet that inches away from Emily's face over to keep it from hitting her and then he notices Malina in the doorway, Tommy then teleports himself and Emily to safety.

When he does this, time unfreezes, him and Emily and gone, so the bullet hits the wall and Luke's fire hits the ice cram with explodes and gets everywhere, Joanne seems confused and she runs out the shop. She's running with Luke chasing behind her then Prime pulls up and tells her to get in. Back at the warehouse, Deirdre, a member of Hero Truther's group, uses her ability of Image Projection to show Taylor all of the missing people. Then she shows Taylor all of his last known locations are she recognizes SunStone Manor, Erica bought it. Jose Gutierrez is in the field talking to who he believes to be his dad, Oscar Gutierrez, however it is just a mind trick by the director but Jose has been tricked and he thinks Carlos is one of the bad guys, so he warns the guards of Carlos and they attack, Carlos dispatches of them fairly easily.

Carlos then finds Father Mauricio, who's also been tricked, more guards come and Carlos runs away but he gets cornered and they stun him. Dearing is tied to a chair, being interrogated by Matt Parkman who is apparently the director. Matt gets into Dearing head and lets him decide what his punishment will be, Dearing goes into a empty room and on a table is a gun, he picks up the guns point it at his head. Carlos wakes up and is welcomed by Matt, he then reads his mind and gets into it the same way he did Dearings. Carlos goes into a empty room and picks up a military assault rifle that was on the table, he imagines that he's back in the war, he's terrified and hiding. This memory also shows Farah Nazan trying to encourage him to fight, apparently, Matt knows her as well.

Tommy and Emily teleport back to the hospital, Noah wants to know where he's been, he tells Noah that Caspar was killed at Moe's, Tommy tries to teleport them out of the hospital, so that they can find Malina but he can't, his power isn't working. Then the lights go out, its The Shadow, Noah tells Tommy to run but he is stopped by Quentin, who has a gun pointed at him, Noah is stunned, he now understands that Quentin is the butterfly, he's changed his time and now Quentin is working for Renautas. Noah wants to kill Phoebe but he can't because Quentin threatens to kill Tommy if he does, so he lets Phoebe and Quentin take him. Noah goes to Moe's only to find officers on site and Caspar in a body bag then he sees Malina and they hug.

Quentin and Phoebe takes him to Erica's place, she sits Tommy down and tells him her version of how he will save the world. Miko Otomo is alive, however she is 7957 years into the future, it is a dry waste land, nothing but sand. 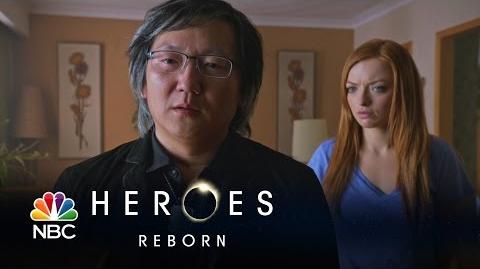 Heroes Reborn - Ahead His Past Is the Future (Preview) 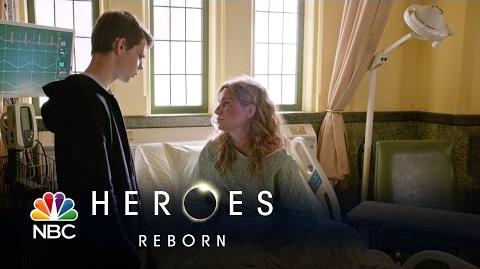 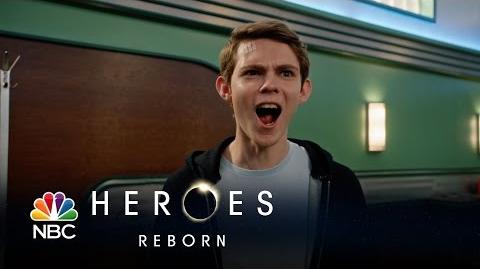 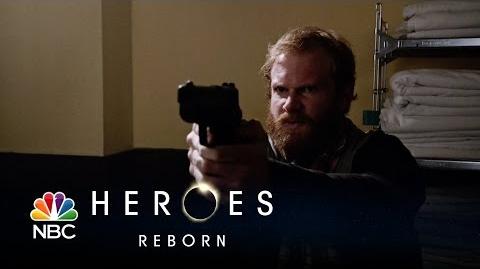 Heroes Reborn - Stabbed in the Back (Episode Highlight) 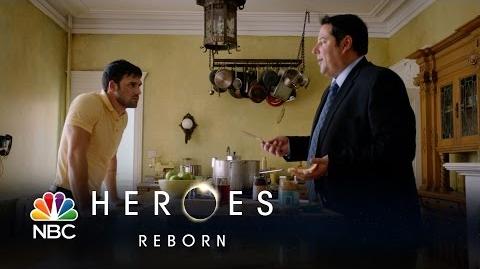