Game Over
The Lion's Den is the fifth episode of Heroes Reborn. It will air on October 15, 2015.

Noah Bennet and Quentin take on Renautas while Miko's plan to retrieve her sword may land her in trouble. Malina's journey brings her closer to the truth. Elsewhere, Luke returns home to confront his past and the authorities close in on Tommy. Meanwhile, Carlos may have found an unexpected ally and Erica solidifies her plans.[1]

Noah Bennet, Quentin Frady and Taylor Kravid are trying to find a way out of Renautas without being captured. Malina and Farah Nazan are on their way to a unknown destination. Malina begins to wonder how is she suppose to save the world, Farah assures her that she'll be ready when the day comes. She leaves Malina in a abandoned building because she has to go and meet someone. Back at Renautas, Erica Kravid and M.F. Harris come to the realization that Miko Otomo is at Renautus, she has come for the sword. She sends Harris to take care of Miko and one of his clones to dispose of Molly Walker's body.

Carlos Gutierrez arrives at the garage to find that it has been destroyed and that Jose is missing. Noah, Quentin, and Taylor discovers that Erica has built a very large seed bank in preparation for world wide extinction. Luke Collins arrives at his house in search of Joanne. Farah calls Caspar Abraham after waiting for hours for their contact to show up, she then turns invisible and walks off but is being followed by Harris. Tommy Clark is being interview by a worker for the government, he knows all about Tommy, even his former alias.

The agent tells Tommy that he was adopted, Tommy can't believe it, then he teleports himself, agent leaves the room to find him but runs into Caspar Abraham first, he uses his ability to make the agent forget about Tommy. Farah goes back for Malina but they are stopped by Harris and another agent. They attack her but Malina is there to help, she uses her control of the elements to form a huge gust of wind to toss the agents. Carlos shows up at the precinct looking for James Dearing, then the E.P.I.C glasses for law enforcement arrive and two fellow officers put them on and discover that the detective is a EVO. Dearing punches one of them but is tranquilized before he could do any further damage.

Erica is in some type of underground facility talking with the the creator and/or engineer of the device that will lead to the near extinction of everyone on earth. Ren Shimosawa and Miko are following Harris to see if he can lead them to the sword. Farah explains that the people that are after her work for Renautas, a corporation that wants to make sure she doesn't complete her mission. Luke is watching old videos of him with his deceased son, then he calls someone named Marcy and says that needs to see Don. Malina and Farah are cornered by the agents again, Malina is sick of running, so she attempts to use her ability to defend them but they have been deactivated by Phoebe Frady A.K.A "the shadow", they try to run away but Farah is shot, she gives Malina a envelope and tells her that the envelope contains all the answers that she's looking for and to leave with out her. Malina then climbs on to a truck and hides under a blanket. Tommy teleports into Emily's room, he tells her everthing he's learned within the past few hours.

Miko and Ren find Harris with the sword but he puts it in his car, before he could drive off with it, Ren stashes his phone on the car and uses the GPS to track it. Dearing is thrown into a truck to be taken away but before they even make it out of the garage, they are stopped by El Vengador, he saves Dearing and tells him that he wants to know where Jose and the priest are at. Erica arrives at her house to meet Taylor, they begin arguing. Noah and Quentin confront Erica, she now realizes it was a trap, they want to know what happen to Claire and Phoebe. Erica tells them that everything she has done and will do is for survival and a better future. Harris shows up with the sword and points his gun at Noah, who then notices that it's Hiro Nakamura's sword. Miko comes flying in through the window grabs the sword and teleports away which provides enough of a distraction for Noah, Quentin and Taylor to break free. Tommy teleprts back to the hospital and gets into a fight with his adoptive mom, she agrees to tell him everything and then Caspar enters the room.

Quentin points a gun at Harris, he wants to know where Phoebe is. Tommy wants to know why Caspar has been following him for over a year. Anne tells him that she took him away because if he knew the truth, he would try and save his dad. Caspar tells him that he has a destiny to help save the world. Luke goes into his sons room, takes his sons toy boat that they built together and he burns down the house. Erica is told by one of her workers that things are happening much faster than they anticipated, they have less than a week, he tells her that solar radiation will hit the earth and wipe out 96% of the worlds population. 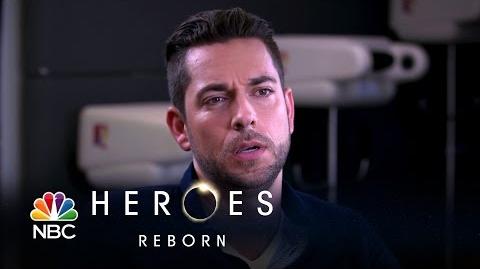 Heroes Reborn - Inside the Eclipse Episode 5 The Lion's Den 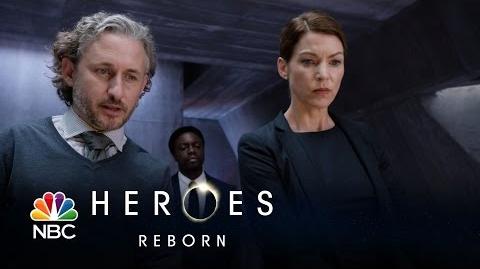 Heroes Reborn - The End of Life on Earth (Episode Highlight) 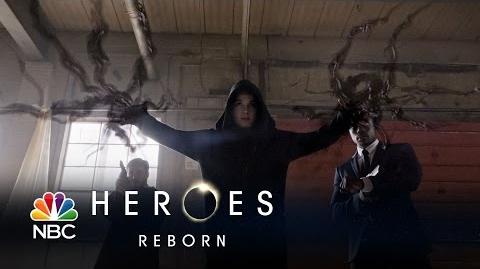 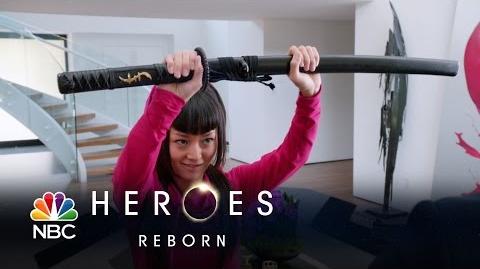