Tracy Strauss is a former politician adviser to New York Governor Robert Malden. She is an evolved human with the ability to freeze objects. After joining forces with Arthur Petrelli's Pinehearst group to give people abilities, Tracy's ability was revealed to the American President by Nathan Petrelli. Tracy was captured by Danko and taken to Building 26 before being rescued by Micah Sanders. After sacrificing herself her own life, Tracy's power evolved and she went on a killing spree. She soon saw the error in her ways and began seeking redemption by using her old life to help people.

Tracy is one in a set of triplets along with Niki Sanders and Barbara. Upon birth, she was granted the synthetic ability of freezing by Dr. Zimmerman upon the request of the Company.

After discovering her ability, she joined forces with Arthur Petrelli's Pinehearst Company so as to give Nathan the opportunity to become President of the United States with her at his side. However, after Pinehearst's defeat, Tracy was fired by Nathan and later betrayed as he turned her information to the US President. She was the captured by Danko and imprisoned in Building 26. Tracy was later rescued by her nephew, Micah Sanders, who was forming a rebellion against Nathan and Danko, and sacrificed herself to allow him to escape. Tracy resurfaced later with the murder of four Building 26 agents.

Tracy makes a suggestion to Malden for Nathan to serve as senator for the state of New York. On her way to her car a reporter stalks her with images from lasvegasniki.com. The reporter informs her he will make an article about her, but she denies that it is her. However, the reporter's sources claim otherwise, and she makes her getaway.

When she goes to his hospital room, Nathan automatically thinks that Tracy is Niki. Tracy is confused about this. She offers him the Senate, giving him her phone number. Later, Nathan accepts the on the condition that she will be on his staff. The reporter returns, this time with a DVD of Jessica having sex with Nathan at the Corithian. She gets so angry at the reporter that her cryokitetic ability manifests, and she accidentally kills him. She is shocked and runs away.

In Volume Four, after the Pinehearst incident, Tracy was going to enjoy a bath when she's captured by a commando team. She is then transported to an airplane hangar where she is hooded, drugged and in an orange jumpsuit. When she was unhooded and undrugged by Claire, she was gasping for air. After escaping from the plane crash, she teamed up with Peter to try and take down his brother, Nathan, but unfortunately, Tracy, in a moment that lacked common sense, was going to betray Peter, believing that Nathan was going to give her back her life, when Peter betrayed her and left her with Nathan. She is then hooded while tied to a chair in a van for 42 hours, when she is unhooded by Nathan. Unfortunately, she is re-drugged and rehooded as Nathan walks into the shadows.[2]

After escaping the clutches of Danko, Tracy ventures into a shopping mall where she meets Micah, her nephew, who reveals himself to be the mysterious Rebel that has been sending messages to Claire. They go into the parking lot of the mall, where they find themselves followed by agents sent to capture Tracy and Micah. In order to save Micah and make sure he is not captured alongside her, Tracy tells him to run, saying "Keep doing what you're doing, Rebel. Go!... And Micah! Stay ahead of the ice." She then allows herself to be surrounded by agents, at which point she releases a huge blast of ice, turning her into an ice statue and seemingly freezing all the other agents and the entire parking lot too. Danko, who was out of the ice blast's range, walks towards the icy statue that is Tracy and shoots it twice, shattering it and supposidly killing Tracy. However, Tracy's body sinks and is collected through a drain, and her right eye blinks and sheds a tear, foreshadowing her return.

Tracy is fiercely independent and gives as good as she gets all the time. She isn't afraid to fight for what she wants and even went as far as to have sex with her employer just to make sure he wouldn't sack her. She doesn't beg for anyone either as shown when she is attacked by Danko's squad. At first Tracy was confused and terrified of her power and soon entered depression and tried to kill herself. She had a brief sexual relationship with Nathan Petrelli and agreed to help Arthur Petrelli in his plan to create a synthetic race of super-soldiers using the formula. She has also shown huge levels of aggression and desire for vengeance such as when she kills an innocent bystander when trying to escape captivity in Building 26 just to show how far she is willing to go. She is self confident and never gives up. 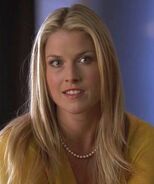 A hooded Tracy in a van